On a wet Sunday in February (name one, any one) many friends and customers of Bright News gathered to wish Vinod and Meena Mashru a happy 25th Anniversary. We saluted the establishment of a bright and wonderful corner of Brighton convenience and conviviality. The afternoon of jolly celebration reflected the twenty five years of the Mashrus at the heart of the West Hill Community. 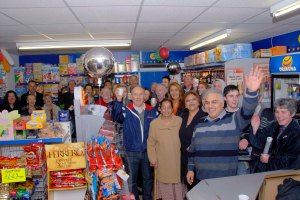 When the crowds had left, I asked Vinod to tell me where it had all began. He came to England in 1982 to explore commercial opportunities for his family textile business, based in Bombay. He spent two years travelling back and forth between Britain and Bombay until the day he met Meena at a function at Brent Town Hall in 1982. It was love at first sight and he was soon introduced to her family, who were based in Tunbridge Wells. Reluctantly, he returned to Bombay to carry on working in textiles, but he remained in touch with Meena. No Skype or email in those days – they became firm long-distance telephone friends, so much so, that Vinod even proposed to Meena over the phone. Vinod moved over to England on the understanding that they would not necessarily stay here for ever.

They married in August 1984 and started to look for a business to run together in Brighton. They managed to find a small, run-down newspaper shop in Buckingham Road next to an off licence and Alf’s the grocer, and the rest, as they say, is history. Bright News opened on 18 February 1985 and in 2004 Vinod and Meena expanded next door into the off-licence space and continued to build up their range of magazines, everyday, organic and fresh foods. They always had oodles of charm.