Every now and again a scandal surfaces in the wine world, which reverberates beyond the confines of the connoisseur’s press to a wider public. The Austrian wine adulterated with antifreeze in 1985 springs to mind. This time the victims are less likely to be you or me, regular wine drinkers, but that rarefied world of super rich fine wine collectors.

The story starts with a wealthy German wine fan, Hardy Rodenstock, who had made his fortune promoting pop bands in the 60s and 70s. His social set was international, and included many showbiz celebrities, as well as wine critics and rich wine collectors. His tasting parties became legendary. I came across him reading Jancis Robinson’s autobiography years ago in which she describes a 7-day marathon tasting held in Munich at which 125 vintages of Chateau d’Yquem were shown, the oldest dating back to 1784 and including every vintage from the 20th Century – this was the biggest d’Yquem vertical tasting that has ever been held and all paid for – including five lunches and seven dinners – by Hardy. 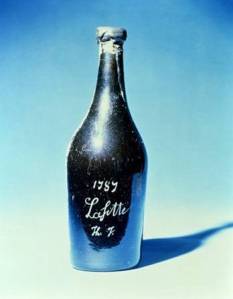 The provenance of his wines never seems to have been seriously under question (Emperor’s new clothes?) until an American collector Bill Koch filed a lawsuit. 17 years earlier Koch had purchased at auction in the US several bottles of what, to this day, remains the most expensive bottles of wine sold in the world. These were allegedly Chateau Lafitte from Bordeaux, the 1784 and 1787 vintages. Vintages this old are rare enough but what really made them special were the initials ‘Th. J’ inscribed on the bottles. They were said to have come from the Paris cellar of wine lover and future US President Thomas Jefferson, when he had served as the US’s ambassador to France 1785-1789. The value of each bottle was £105,000. The man who had ‘discovered’ these fascinating gems and brought them to market, allegedly via a Parisian (unknown to this day), who found them behind an old walled-up cellar in that city, was, of course, one Hardy Rodenstock.

It wasn’t until 2005 that Koch received information that made him suspicious and which spurred him to file the lawsuit. Koch assembled a crack team of forensic scientists, ex FBI detectives and wine experts to try and prove that he’d been swindled. A trial took place but due to Rodenstock’s German citizenship has never been satisfactorily concluded to this day one way or another.
As an addendum to this story a book about the case by Benjamin Wallace (The Billionaire’s Vinegar) was published in the US. It inferred that certain leading UK wine experts, notably Michael Broadbent, who had auctioned some of the Jefferson bottles whilst Head of Wine at Christies, had acted unprofessionally. Broadbent sued the publishers Random House for libel and won his case just before Christmas. As a result The Whistler readers won’t be able to get the full story as the book is banned in the UK! However I understand a Hollywood consortium has purchased the film rights to this splendid saga so we may be able to relax on our sofas with a glass of inexpensive Cotes du Rhone and be entertained by the goings on in the world of uber-rich wine fans.