Wine – a question of taste

I spend (even) more time pondering this question than I do the nature of the universe. Every now and then I taste a wine and understand more than I did before; and one such occasion was at a wine tasting in London recently. Paco Casas, the wine-maker from Pago de los Capellanes in Ribera del Duero, gave us five wines to taste and his description of what he had done differently to make each of these tallied so beautifully with how they tasted that I felt I understood what is so often a mystery.

To go back a step: Ribera del Duero (“banks of the Duero river”) is in north central Spain. At 800 metres it’s cold in winter, hot in summer, bone dry for months then flooded by torrential rain. Its redeeming feature is the Duero river which makes wine-making possible. At Pago de los Capellanes they make five different red wines, all using only the tempranillo grape, yet all tasting different. How can that be?

Paco started the tasting with his basic wine, called Joven 2012 (meaning “young” – there’s nothing fancy about naming at Pago de los Capellanes). It’s a mixture of juice from 40 parcels of vineyards across the estate. It’s fermented in stainless steel vats then matured for 5 months in French oak; after that it’s bottled and ready for drinking. The wine is a rich red colour with a lovely fruity tempranillo flavour. It sells in England at £15 a bottle and it’s worth every penny.

However, it’s the cheapest of the Pago wines. The Crianza 2010 comes from different parcels of land, the vines are older and have already demonstrated their ability to produce wine of greater potential. The huge fruit flavour is still there but modified to a greater elegance that comes from longer aging in oak – 12 months this time. It’s the flavour sometimes referred to as ‘leather’ or ‘cigar box’. It sells for £22. 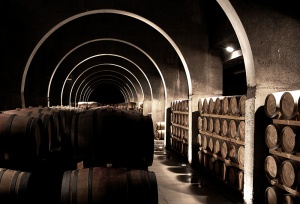 ears old. The wine is aged in oak for 18 months. The interaction between wine and oak is more intense. El Nogal 2009 is from just one parcel of land and is only made in favourable years when the grapes are small and the juice especially concentrated. It’s fermented in oak barrels, not steel, then aged in oak for 22 months. It’s decanted every 6 months into a new barrel, using a different type of French oak (isn’t that fancy?). The cigar box flavour is softer, while the fruit is still intense. Finally, El Picon 2009, made from the best parcel of land on the estate, and only made in good years, is fermented in oak then matured in barrels for 26 months, and is the top of the range. “Huge perfection” I wrote in my notes. Wine critics have likened it to a great Bordeaux. It’ll easily keep for 25 years (and costs about £140).

So what was my great insight? Of course the terroir is important. There’s something about that parcel of land – its mix of clay, limestone and pebbles – and its exposure to sun and wind, that gives grapes from El Picon the potential to make the greatest wine. Paco couldn’t make a great wine from Joven however hard he tried. But what was special about this tasting was to see how exposure to oak, and the time spent in the barrel as well as the bottle, develops that potential – and justifies the enormous price tag.