Och Aye or No?

Financial guru, David Foot, wonders about a vote in a land not that far away…

By the time you read this, it will all be over. The die (or rather the votes) will have been cast, and we will know what the future holds for Bonny Scotland. Some may wonder what it has to do with us, way down on the south coast, but financially, it could have some pretty dramatic implications. Some of the UK’s best known names in the financial sector are institutions that are based in Scotland. Anyone who has been involved with the Life Assurance, Pensions and Investment industry, will be very well aware of the Scottish Mafia and even, arguably, the best known Standard Life, is based in Edinburgh. Many have already announced that, in the event of a Yes vote, that they will relocate to England, something that must have given at least some weight to the No’s. You may recall what I have said repeatedly in this column over the years, is that stock markets do not like the unknown. They fear uncertainty and love nothing more than a benign outlook, a fair forecast, with no stormy clouds on the horizon. The nimbus clouds over Hibernia have cast a shadow over the FTSE100 from the second it was reported that the Yes voters were ahead in the polls for the first time. Latest results have swung the other way, and the losses have stopped for the moment.

Interestingly, there has just been publicised what has been called the ‘Scotsie 100’, an index of 100 purely Scottish stocks. Comparing this with with a similar rest of the UK index over the last 60 years researchers found that £1 invested in the ‘Scotsie’ in 1955 would have grown to £648 today (with dividends reinvested), while £1 invested in the rest of the UK would have grown to £1,168 – almost twice as much. This owes much to the woeful story of the financial crisis, and particularly RBS and HBOS (taken over by the then Lloyds TSB). 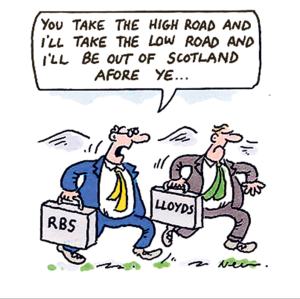 Both institutions have stated their contingency plans to move their headquarters / registered office to England in the event of Scotland leaving the Union. It is fair to say that both businesses are in a better financial state due to Government bail-outs and quantitative easing, and that the financial future for them is relatively rosy. Scotland, being part of the Union, allowed them to benefit hugely in the financial crisis compared to such other countries as Cyprus, Ireland, and, of course, Iceland (interestingly a country that broke away from its former ‘parent’, Denmark). Without the Bank of England as the lender of last resort, one wonders what would happen to purely Scottish institutions should there be a similar crisis in the future. Much has been made of the oil stocks in the North Sea, that would be the Scottish family silver but it is, indisputably, a finite resource, and it would not be difficult to see oil production increasing in order to provide revenue to kick-start the newly freed Scottish economy.

In any event, there has been increased volatility, the nearer we get to the vote. A Yes vote will probably see both stock market and currency falls, and a No vote may push the FTSE indices towards their historic highs.

Overall, I am ambivalent on the subject: we shall see what we shall see and make the best of whatever happens. On a personal note, though, as a music lover: if the Yes vote wins, and the Scots sail off into the Atlantic, please take your bagpipes with you!

See you next time.