Well, there we are then, as if by magic, the Footsie reached an all-time high in the last week of February, proving that it is very much a matter of sentiment, rather than logic, that dictates such matters. Not that I am saying there is no value to be found in the market at the moment, but this record level was swiftly followed by several disappointing falls, yet it still hovers within a couple of hundred points of the peak. I can only see this sort of pattern continuing for the next couple of months. Once the General Election day has passed then, depending on the result, we might just see an element of stability.

On the subject of the election, it is not easy to say what the right result would be over the long term. Historically, the political persuasion of a Government has not always been that important a factor in the performance of the UK stock markets. In fact, there is a strange pattern, that has developed over the years. Governments come and they go, and stock markets go up, and they go down, and it doesn’t really matter who is in charge! Whilst it is fair to say that there is almost always a period of uncertainty around the times of General Elections, businesses – especially big businesses – would probably rather that they did not have the inconvenience of politicians meddling with things, while they try to get on with the day-to-day matter of running and growing their companies. The irritation of having politicos fiddling with economics is something they just have to live with. Give them a Government with a reasonable majority and a well-publicised plan of action and they all just tend to get on with things! It tends to be the “unknown unknowns” (as Donald Rumsfeld would say) that really mess things up. The ‘Black Swan’ events that come out of the blue (sorry to mix my colours there) are the things that have the dramatic effects on share prices. Oil crises, earthquakes, tsunamis, acts of terrorism, and large banking failures spring readily to mind. 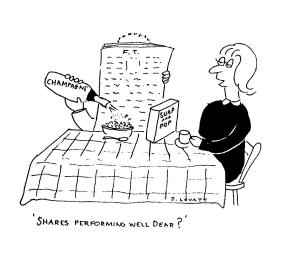 Clearly, this is a very broad brush illustration and markets are affected by the machinations of the current occupants of Number 10 and their cronies, but these are mostly short-term affairs and markets pick themselves up, dust themselves down, and, before long, start all over again. As I have said before the only thing we can be sure of is that what goes up will come down, and vice versa. Trust the long-term trend though, and you should come out fine in the end. Look at the cyclical nature of markets and, if you can, take advantage of the gloomy times to pick up some bargains amongst the companies or funds that have consistently been well run. Hold onto them and as you start to near your investment horizon move your wealth into less risky assets. Don’t be afraid to take proper, professional advice if you are not confident in choosing things yourself, but make sure that you know what you what you are getting, and exactly what you are expected to pay for it.

Well, enough for now. British Summer Time is looming, and soon the evenings will be much longer. By the time you are reading the next issue of this fine periodical, we should all be enjoying the better weather, the pontifications about the election will be behind us, and we can settle down with a nice glass of something refreshing, and an ice-cream cornet! Until then, think happy thoughts, and hope that we don’t end up with an Italian style coalition!