In the 1960s where the Spar shop in Upper Gloucester Road is now, there used to be two shops. One was a greengrocer run by Jack and his mother, while next door there was a sweetshop where you could also borrow books for 3d (three old pence) a book. Jack had befriended an elderly lady who had nowhere to live, and rather than let her wander the streets at night, Jack would let her sleep in a room upstairs. She was a happy soul. She would walk around West Hill during the day, smiling at passers-by, saying, “Isn’t it a lovely day?” She never did any harm to anyone and she always had something kind to say. One morning Jack went upstairs and found she had died…

The dairy in North Gardens was much smaller than the one which has just been knocked down. It, too, had a little greengrocer shop. Everybody obviously ate a lot of vegetables in those days! To help the milkmen through their working day, a lady living in North Gardens would take ‘the boys’ a huge pot of boiling tea at about 10.30am every morning, come rain or shine.

Her proper name was Mrs Agnes Barnes, but ‘the boys’ preferred to call her Aggie. As she neared the depot they would call out, “Hello Aggie, shall we come and tickle you, and make you drop the tea!” Aggie would roar with laughter.

Every summer they would take her on an outing to Southend. They’d spend the whole day there, and then drop Aggie back home to North Gardens in the evening. As they dropped her off, peals of laughter could be heard ringing down the street. Aggie was back from her day off!

I know an old lady who does her own hair
Higgledy, piggledy up in the air;
Whirly and girlie and still very curly,
Once it was chestnut, now it is fair.
And now that she’s seventy (or eighty or ninety)
You’d think she’d be living sedately and quietly,
But no, she’s off up the Hill in her nightie,
Off to play darts in the pub, I declare. 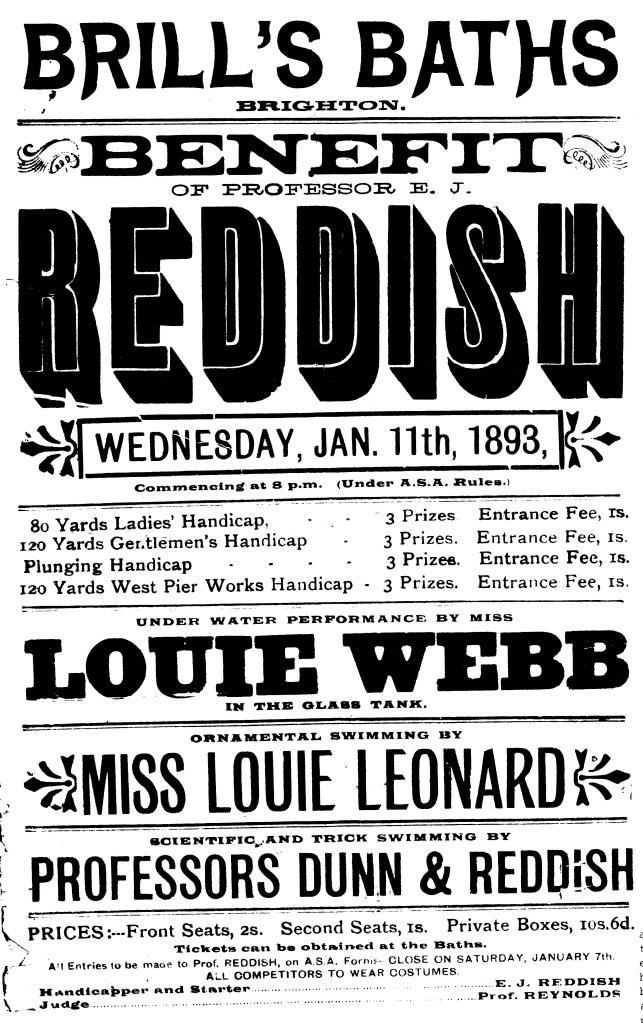 Many of you must be familiar with Bob Leighton, who leans over his gate at the end of Camden Terrace and chats with passers-by. Bob’s mother was a wonderful old lady who went to the Terminus Road Post Office regularly until she lost her sight.

One afternoon she asked me if I could guess what she had done to earn her living as a young woman. I could not, and she would have been a successful candidate for ‘What’s My Line’. She had been a high diver. She has started her career in Brighton, diving off Brighton Pier; had appeared before the Infanta of Spain in Madrid in 1893; and had dived for wealthy yacht owners in the Mediterranean.

The poster from 1893 shown above bills Bob’s mother as ‘Miss Louie Leonard, ornamental swimmer.’ Bob also lent me a little notebook of newspaper cuttings from 1897, carefully described in Mrs Leighton’s immaculate handwriting. The photographs he has, in faded sepia, show Miss Louie Leonard, lady swimmer, wearing frilled and embroidered bathing costumes. She must have been a sensation all those years ago.

In 1897 a Professor Baume was performing at Brighton’s Royal Aquarium. He threw himself from a platform seventy feet high into a tank six and a half feet deep tied in a sack. The intrepid, eighteen year old Louie challenged him that she could match his feat. He was incensed when she achieved it. The Star newspaper 20 June 1897 reported that a grand battle of the sexes was raging at the Royal Aquarium. In retaliation, the Professor performed the dive with a suit of clothes over his tights and smoking a cigar – and all inside the sack. He came to surface minus the suit, with the cigar still alight.
All this was widely reported and Mrs Leighton’s notebook holds 20 newspaper cuttings recording her diving prowess. In our West Hill community, we can be proud of Mrs Leighton.

Wouldn’t it be nice if…

…paying £80 for a resident’s parking permit meant you could find a place to park your car.
…only the people whose dogs fouled the pavement ever stepped in it
…the people with noisy car alarms parked outside their own house instead of yours!

I have often pondered as I sit in the Jacuzzi sipping champagne, what will be written on my gravestone? How will I be remembered? Of course, I suppose it will all depend on how I go. What filthy trick of fate will be my final undoing? For example, was it Hemingway who had “I told them I was ill” scratched on his headstone? [Spike Milligan – Ed]

So, let me think. If I were to spontaneously combust, it could be “Is it getting hot in here, or is it just me?”
Run over by a bus: “Excuse me, driver, do you stop at…”
Parachute accident: “Two thousand and sixty-eight, two thousand and sixty-ni…”
Rabies: “Here boy, good doggie.”
Eaten by a crocodile: “Gone fishing.”
Zapped by aliens: “Oi you, get your bloody car off our roof”

So you see, it’s how you go that counts. Send in your ideas and you could win the trip of several lifetimes to the outer rings of Saturn. 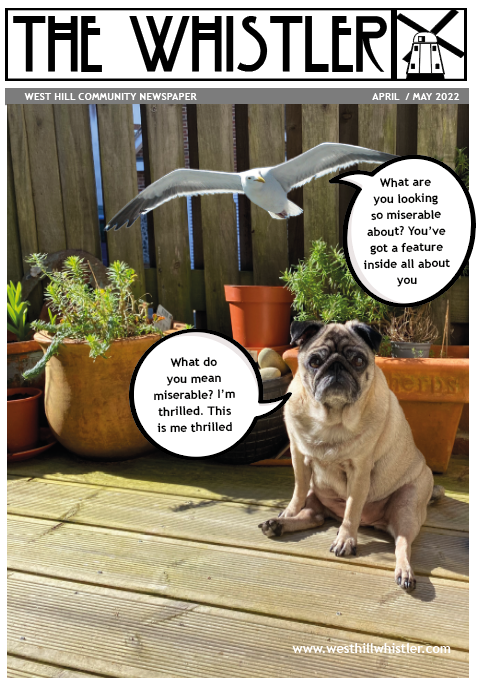 Who doesn’t want a night of drama, healing and dark humour? No one, right. Described as a “a quirky, likeable trip through the inner life of an urban young woman”, ‘The Formidable Lizzie Boone’, Manchester based Selina Helliwell’s new play, is centred around a therapist’s office, the show […]

In this foundation course you will learn the basic steps in Cha Cha Cha, Waltz, Rumba, Social Foxtrot, Ballroom Tango & Jive.After the 6 weeks course you will be our new Beginners class and you can come on a pay as go (dance) basis.*Start:Friday 20 May 2022(NO class […]

“So last night I went to a late night burlesque featuring a dancing nipple-tassled woman in a shark outfit”. Isn’t that exactly the sort of sentence you want? I love the late night burlesque show at The Rialto. If there’s anything that the spirit of the Fringe, this […]