My title will probably mean nothing to most of you. Even if you are a jazz fan your enthusiasm and knowledge may not extend back much beyond the 1950s. It refers to a series of recordings made between 1939 and 1940 by a jazz band called ‘Muggsy Spanier and His Ragtimers’. 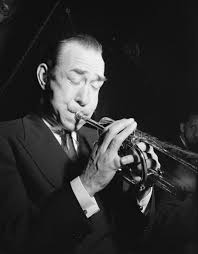 Muggsy, real name Francis Joseph Spanier, was born in Chicago in 1906. By the early 1920s he was already a professional cornet player. He was to continue playing that instrument for the rest of his career, although most cornet players had switched to the trumpet by the end of the 1920s. Chicago at that time was becoming the jazz centre of the USA. Many influential jazz musicians had come up the river from New Orleans, including Joe ‘King’ Oliver, Jelly Roll Morton and the young Louis Armstrong. Jazz bands could be heard at night in many parts of the City. Muggsy soon became an accomplished jazz soloist.

In 1924 he made his first recordings with a group called ‘The Bucktown Five’. They show that Muggsy had already been listening to the great jazzmen who had settled in Chicago. He had heard the young Louis Armstrong, but he must have been even more impressed by Louis’ mentor, Joe Oliver. His muted style is definitely based on that made famous by the ‘King’.

In the 1930s Muggsy spent several years with the band of clarinetist, Ted Lewis. He was a featured soloist and his reputation grew. Then, in 1938, he became seriously ill and spent several months in a New Orleans Hospital. When he recovered he decided to form his own small band with the name ‘Muggsy Spanier’s Ragtimers’. As I explained above, he was able to record a series of sixteen very well-planned recordings. They set a standard for the ‘Dixieland’ style of jazz which has never been excelled.

But there is another reason for the significance of the “Great 16”. The tunes Muggsy chose, present an excellent survey of the way in which jazz had developed in the years from 1920-40. For example, he re-created Joe Oliver’s famous ‘Dippermouth Blues’ and played an almost exact copy of Joe’s great solo. On several titles he used a cup mute in the Oliver style. He included tunes made famous by Louis Armstrong, like ‘Big Butter and Egg Man’ and ‘Black and Blue’. He updated a Ragtime composition, ‘Eccentric’. He also recognised the great influence of the Original Dixieland Jazz Band; their lively tune, ‘At the Jazz Band Ball’ is one of the best recordings of the 16.

He also recreated, beautifully, their comedy number, ‘The Livery Stable Blues’ with its barnyard chorus. His selections summed up the character of the first 20 years of jazz.

Unfortunately for some elderly jazz fans, ‘The Great Sixteen’ is a painful reminder of change. They believe that with the coming together of Dixieland bands like the Ragtimers and Bob Crosby’s ‘Bobcats’ with the Swing of Benny Goodman, Count Basie and Duke Ellington, jazz reached a beautiful maturity by 1940. To their horror the World War 2 years brought both the dark, eccentric music of Bebop and the rugged regression of the New Orleans Revival.

If only Jazz could have been frozen in time so that the music they loved would continue for eternity!