Tread carefully. We are about to enter a minefield. In fact we have already stepped into it. Someone reading this article will have remarked that I did not begin with a ‘Proper’ sentence. My subject is the teaching of our language and the current debate about tests for school children.

I do not propose to join the argument, but I would like to make one or two relevant points. The first is about Grammar: it is descriptive and not prescriptive. I mean that when scholars set out to study languages they are interested in the history of a language, its present usage and any changes which are taking place. They are not interested in some mythical ‘Correctness’. There are hundreds of languages which scholars can study; some are no longer in use, but most are still very alive. One important point: scholars regard all languages as equal and different. There is no ‘league table’ of quality.

For centuries the study and teaching of our language was handicapped by the imposition of descriptions and false rules derived from Latin. At my Grammar school we wasted many valuable hours in the classroom analysing the construction of sentences using clause descriptions borrowed from Latin. Very little time was spent teaching or discussing the development of an individual writing style or relating a variety of styles to their context. 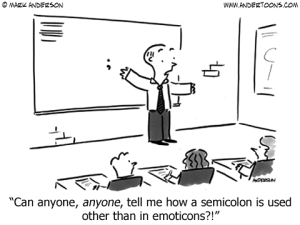 Let’s get down to the basics. The English language is a collection of words. One of the most useful things a teacher can do is to increase the number of words that his pupils understand and can use properly. (I am not going  to be side-tracked into a discussion about spelling.) Each of us has a personal vocabulary, our own selection from those available words.  His next task is to help his pupils assemble those words in meaningful combinations. There are two basic aids for this task. The first is the choice of names for certain categories of words – nouns, verbs, adjectives etc. – to describe how they will fit into those meaningful combinations. The second is punctuation, which is often given too much time in lessons by teachers who lack the ability to talk with more imagination about how words may be combined in meaningful structures.

While I was at university I had to think carefully about my own writing style. It was often the subject of severe scrutiny by my tutors. I decided that the essays of George Orwell would be a good model. He wrote very simply but forcefully on a wide range of subjects.  When I found myself teaching GCE pupils my first advice to them was “Keep it simple”. Let me give you an example. Take the sentence, “While I was waiting at the bus stop, I fainted.” My teachers in the 1940s would be keen to point out that the first 8 words can be described as “an adverbial clause of time.” In the 1960s examiners decided that learning such analyses was a waste of time. Does a pupil learning to write in English really need to know that? The sentence makes one main statement: “I fainted.” To explain when and where that happened a supporting statement has been added. The pupil needs to decide whether to put the supporting statement before or after the main statement. That is a question of style – and in this case it does not make much difference. Even the comma I have put in is not essential. The current trend in English is to keep punctuation to the minimum required to make the meaning clear. In this case the comma is not needed.

There is no need to teach grammatical sentence analysis. The task is to teach pupils how to put together meaningful groups of words and then how to arrange those groups in paragraphs. This brings me to another basic point. Usually when we sit down to write we are not writing in isolation. We are writing to someone. Whom that person is should decide the style that we will adopt. The style we use in writing to a friend will not be the style we choose when writing to an elderly relative. When we apply for a job another, more careful, style will be adopted. If we have to write letters for an employer we will expect that employer to give us some guidance about the style he requires to represent him. A teacher should make his pupils aware of these differences as part of thinking about how to write meaningfully in our language.

Let me add a little postscript before I leave. Almost every day I hear someone, usually a politician, talking about school pupils achieving “a proper command of our language,” or immigrants being required to have a “basic” knowledge of English before we allow them to live here permanently.  Almost without exception the person speaking has not the faintest idea what “a proper command” or a “basic knowledge” might be. Before we start to argue about SATs tests could someone please provide our government with some sensible criteria? Good luck with that!