Is Bordeaux Really that Special? 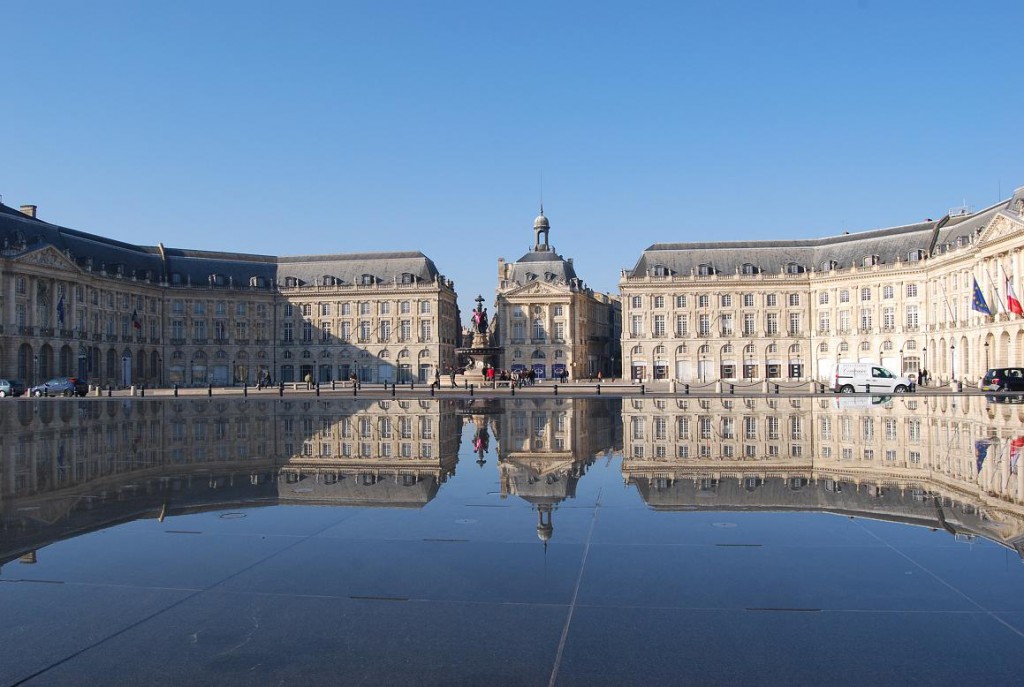 The ‘Miroir d’Eau’ in Bordeaux city

I’m treading on hallowed ground here. I’m going to write about some good and some great Bordeaux châteaux. Some of them are names I’ve known with awe for 50 years. I’ve not tasted many of them till now but I know the orthodox ideas: that Bordeaux wine has a distinctive style which no other wine growing area can successfully imitate; and that the complex hierarchy of names (appellations) within Bordeaux reflects genuine differences of terroir; meaning that a great wine cannot be made in an estate with a low-ranking appellation. For instance, a wine from the Côtes de Bourg can never reach the standard of a Margaux despite the one being just across the river from the other.

That is the accepted wisdom. I prefer to think that none of this is true: that the Bordeaux style is not unique to Bordeaux, that châteaux close to the great ones but outside the appellation could, if they tried, make wines just as good. There’s some evidence to support me, most famously the ‘Judgement of Paris’ in 1976 when, at a blind tasting, French experts couldn’t reliably distinguish famous Bordeaux châteaux from Californian cabernet sauvignon-based wines, and awarded the highest overall score to one of the Americans. The French were so shocked that one asked for her marking paper back so she could alter it, and no French newspaper reported the results, even though it was all over the British and American press!

The Wine Society has allowed me to put my ideas to the test by offering its members a tasting of 38 Bordeaux wines from its list. It was held at Lord’s Cricket Ground, which put some of us in a good mood from the start. The wines ranged from The Society’s Côtes de Bordeaux at £8.50 to Chateau Léoville-Barton at £79 a bottle. They were almost all reds and I’ll confine my observations to those.

From the start I found that there was a common style to these wines, shared by every one of them. It’s a flavour of dark fruit – blackcurrant is the nearest I can get to it. However, it’s not a fresh fruit taste; it has a maturity and complexity that tends towards the flavour referred to as “cigar-box”. It’s strange that there is a coherent style when the left bank wines are made from cabernet sauvignon and merlot with a touch of something else, usually cabernet franc or petit verdot, while the right bank wines are dominated by merlot with cabernet franc and little or no cabernet sauvignon. Right bank wines aren’t identical to left bank wines (less cigar box, less tannin) but their similarity – their Bordeauxness – is striking.

What about the question of quality? Does it really go down if you cross the border from St Emilion into the Côtes de Castillon for instance? Yes, I’m afraid it does. Move from Château Canon La Gaffelière in St Emilion to Château d’Aiguilhe in the Côtes de Castillon and the price drops from £69 to £19 but so does the quality – from one of the richest, most complex reds you can imagine to a very good, but undistinguished wine. Similarly, in this tasting, all the really good left bank reds came from the Haut-Médoc and the great wines from the well known châteaux in the Haut-Médoc. It’s not proof but it looks as though the idea of terroir in Bordeaux is based on real differences between one estate and another.

Where does this leave a wine lover who can’t afford good Bordeaux? One solution is to join The Wine Society and drink its Côtes de Bordeaux. Another is to get to know the supermarket Bordeaux on offer and stick to a good one, avoiding the tasteless stuff still sold as Bordeaux that doesn’t give you the right idea at all. Or try a local wine merchant and get personal advice about what types of Bordeaux they have for sale.