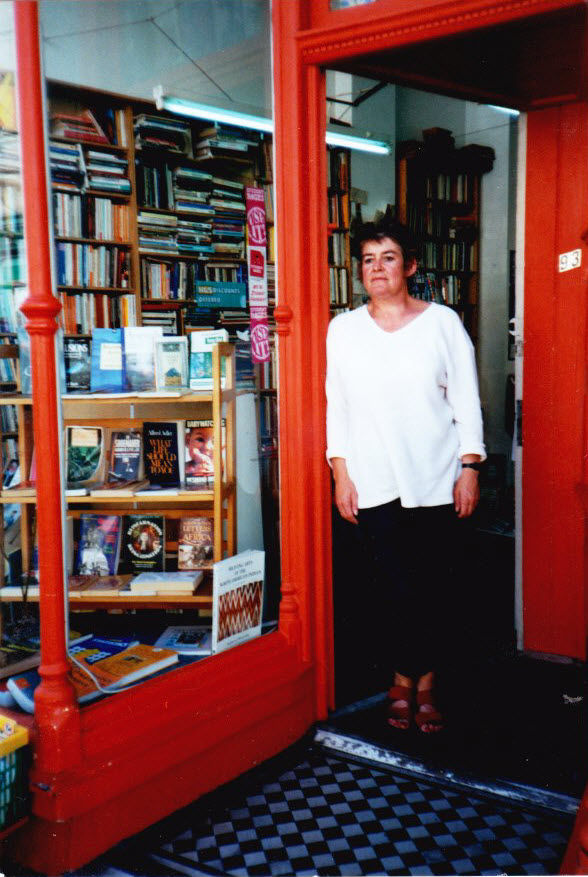 A quarter of a century ago, in a Brighton that now seems gone from us forever, an intrepid soul, Sally May (pictured) opened a second hand bookshop at Seven Dials, not a particularly fashionable area of town in those days. To the right of her shop on Dyke Road was a grubby International Stores where the best-selling line seemed to be breakfast in a tin. To the left was a traditional fish and chip shop. Toilet facilities were provided in a brick hut down an alleyway overwhelmed with vegetation that Sally quickly christened Ivy Cottage.

I was delighted to have a bookshop on my doorstep and soon my day was incomplete without calling in at The Bookmark. With her typically impulsive kindness Sally soon promoted me from the status of customer to friend.

Any quick and simple errand around the Dials to get fags or a pint of milk was now impossible. Somehow or other I’d find myself three hours later crouched with Sally over an antique oil radiator at the back of the shop, happily absorbed in The Guardian cryptic crossword.

From time to time we’d be interrupted by one of the regular customers, many of them baptised with fond or not-so-fond nicknames.

Boring Reg would drop in with his trolley. He was rumoured to have a mail-order bride at home but we never saw her. Then Slightly-Less-Boring Reg (no relation) might pass by. Day after day Muddled Marge would put her head around the door to ask, “Do you sell postage stamps?”

Another challenging customer was Steve, the Rock-n-Roll Vole. Dressed head to foot in black, he would stand and mutter at his suede shoes. We could never quite piece together what fascinating observations he might have been communicating.

An aged spiritualist was named Mrs Moth for her habit of appearing suddenly at the window late on winter afternoons, peering into the lighted shop from the twilight outside, her pale raincoat flapping.

A tiny man with a halo of candyfloss hair and a similarly wispy little dog tucked under his arm came in to ask for anything by Catherine Cookson. He was known ever after as Mister Fluff. We liked to imagine that he had been a chorus boy although he can never have been tall enough for that role.

Best of all was the man who came in one day and said very slowly, all in one breath,
Do-You-Have-Any-Books-About-Boats-That-Sank-To-The-Bottom-Of-The-Sea? Disappointed, he turned away and, sadly, was never seen again.

All good things come to an end and so it was at The Bookmark. At the turn of the century the clip-clip of the shiny shoes of estate agents was heard up and down the street. The newsagent, the cobbler, the ironmonger disappeared one by one. The Coma Café, where grey men had slumped over the Racing Post became, apparently overnight, a sushi restaurant.

In 2003 Sally, recognising the spores of gentrification in the air, sold the shop to a property developer, and Seven Dials died a little death.

But for me that small stretch of Dyke Road will forever belong to Sally and will always be haunted by her wheezing exuberant laugh.

Tagged as: Sally May