The  WHCA AGM in April adopted  reports and accounts from the Trustees. The Hall is well used and maintained; twice-yearly talks on local history and environs have attracted much interest; the Craft Fair and Jumble Bells sale last autumn were both great successes; the nineteenth annual Christmas social went with a bang; the regular monthly Quiz has seen a big influx of participants  and volunteers who take it in turns to set the questions. All very heart-warming.

Equally heart-warming was the response to the request in the last issue of The Whistler for more volunteers to help with the garden at West Hill Hall. We were overwhelmed with the number and calibre of local residents who came forward and offered to help maintain and nurture the garden. Work has begun in earnest to landscape the area at the back of the Hall which was created after the retaining wall was built last year and everyone is pitching in to make our garden grow. Brighton in Bloom here we come! 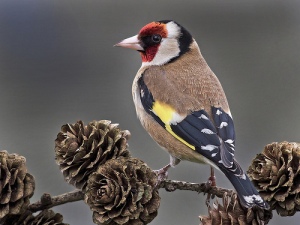 After the article about sparrows in the last issue, we at The Whistler towers have been looking out for them but in the process are excited to have spotted two lovely Goldfinches in our West Hill garden. According to the 2017 RSPCA Big Garden Birdwatch, Goldfinch numbers have increased by 44% since 2007. It’s certainly the first year they have visited us.