With the exception of the small (and much expected) rise in UK interest rates, almost nothing has changed since my last article, and that was written as a result of there not being a great deal to talk about! In the last two months since that article, there have been the usual spats between the President of the United States and Kim Jong Un. The Brexit negotiations are still grinding on, with little or no visible progress, and no signs of any joined-up thinking on the matter. On the latter, I suspect that until the whole tortuous process is over, the UK economy may find it hard to make any meaningful progress. Personally, I am a little concerned about the ‘vision’ for the future of our great country outside the EU. Whilst being sure that our indomitable spirit will carry us through, and the future will still be bright, the prospect of our becoming a low-tax haven, attracting the richest companies and individuals, with an increasingly service-oriented economy (one of the more commonly mooted scenarios) is not one that appeals a great deal to me.

Call me old fashioned, but I think we should make more ‘things’. That may sound strange, coming from someone who has spent thirty-plus years in the financial services industry, but whilst we will never be able to compete in areas where the cost of labour is a major constituent, Japan and Germany (amongst others) have particularly successful manufacturing sectors and high standards of living. It is fair to say that the UK manufacturing sector lost its prominent position many years ago, when the invasion of (predominantly Japanese) imports began to undermine our car and motorcycle industries, taking us somewhat by surprise. It seems that we have been slow to make any serious efforts to redress the balance. Rather, it seems that we have increasingly moved towards our ‘invisible’ trade. We have some of the world’s leading research and development, but somehow so much of the product of this seems to end up benefitting other economies, rather than our own. Irrespective of the colour or shade of our government, we have drifted towards a lower direct tax environment, with increased indirect taxation, more out-sourcing; and the privatisation of everything of almost anything of value. I am, clearly, a fan of capitalism in many respects, or I would probably not have lasted in my career! Be that as it may, maybe the pendulum has swung too far. 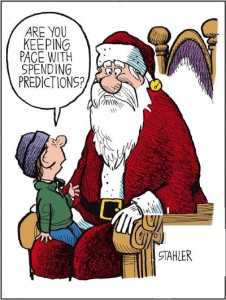 Enough of my pontificating. I’ll close by paraphrasing the words of a highly eminent fund manager from this time last year for a glimpse of what may be in store for next year. In general, world stock markets are not as cheap as they were a few years ago, so the prospect of a forthcoming year of strong market returns looks remote, unless we see the resumption of robust earnings growth. This is not something I expect to see across the broader market, which suggests 2018 will be another year in which it is vital to be selective, and fully understanding of the fundamentals of both the global economy, and the underlying companies therein.

Until next time, have the very best festive season that you can, and I wish you a healthy, peaceful and successful New Year.