I don’t know how it got there, but two weeks ago I found a bottle of port at the back of my drinks cupboard. It was labelled Cockburn’s Vintage Port 1983. I took it round to share with friends. It was a job to open. The cork was sealed with wax that I had to prise off with a knife; the cork broke as I pulled and the bottom end (port corks are longer than those of any other wine) went into the bottle. But filtering it through some kitchen paper into a decanter revealed the port to be a rich brown colour. It filled the kitchen with its smell. It tasted divine – old leathery fruit of incredible power. We drank it with the cheese, we drank it with the desert, we finished it off after the coffee.

Port is, of course, a fortified wine, like sherry and Madeira. That means that spirit is added to the wine during or after fermentation; in the case of port, the spirit is brandy. This is not to get us drunk quicker, it’s to stabilise the wine  – the high alcohol kills any remaining yeast. If you add it when the fermentation is still underway, as you do with port, you get a sweet wine because of the sugar that hasn’t yet been metabolised by the yeast. So port is red wine (occasionally white) to which brandy has been added, and which is then aged, in a barrel, or bottle, or in one then the other. The least interesting wine is matured for as little as two years and sold as ruby, because it’s still red. The more promising wine is kept much longer in barrels, up to 40 years in the case of the greatest wines. They come out brown so they are called tawnies. If the wine is exceptionally promising the wine maker will declare a vintage. This doesn’t happen every year but Cockburn did declare a vintage in 1983. Vintage port must spend less than three years in barrel then it is bottled and left. At first it tastes awful but as the years go by it matures into something extraordinary. 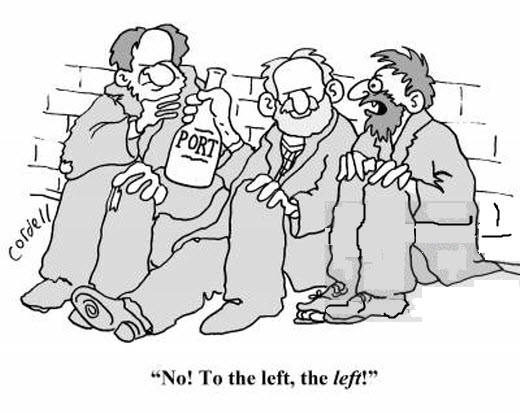 There are a few other styles:

‘Late bottled vintage (LBV) port’ is port that was left in barrel too long to be bottled as a vintage port. It’s bottled after 4 – 6 years and is ready to drink.

‘Crusted port’ is aged in the bottle, like vintage port, but is a blend of several years.

‘Reserve’ is ruby port that’s judged to be a bit better than average. ‘Premium ruby’ would have been a more helpful name. There is still more complexity for those who are interested, but you get the idea.

A good bottle of vintage port can set you back between £30 and well over £100. However, a good tawny, a ‘reserve’ or an ‘LBV’ will be much cheaper and have real character. ‘Seven Cellars’ at the Seven Dials has a small but interesting range. In the large supermarkets ruby and tawny ports start at £7. As usual in life, you get what you pay for.

And if, somehow, you find yourself dining with the Queen and the port starts to circulate, pass it to the left (ie to the port side – but that’s a coincidence). Actually the crucial rule is that the decanter should not be left sitting on the table – you pour then pass it on, till the decanter is empty. That works fine with 20 round the table. But if you and Her Majesty are having a more intimate evening that’s not so good for your health or for hers.