Bloody Mary: In Service to the True God

Politics has never looked so disturbing…or has it?

Political [and religious] extremism involves two prime ingredients: an excessively simple diagnosis of the world’s ills, and a conviction that there are identifiable villains” John W. Gardner

Rape, burnings, beheadings and religious persecution run rife as England’s first Queen Regnant, newly reunited with a politicised Pope, tries to untangle service to God from service to the self.

‘Bloody Mary: In Service To The True God’ is written and directed by award winning playwright Bernie C. Byrnes. Speeches made by Thatcher and the current conservative government are woven through a text that explores damnation and salvation through the eyes of Mary Tudor and her opponents.

The Art of Caring

A bold and uncompromising comedic one-woman show, exploring loneliness amongst the older generation, through the eyes of an audacious young carer.

Have you ever wondered what your life will be like when you’re in a care home? Little Bit of Theatre’s first-ever production tells the story of an audacious carer in a residential care home. With an inspection looming, Gem is caught in the eye of the storm, battling against her mischievous clients, ridiculous management and mounds of paperwork. Absolute nightmare.

“According to Age UK, more than 2 million people in England over the age of 75 live alone, and more than a million older people say they go for over a month without speaking to a friend, neighbour or family member. “(NHS, 2019).

These heart-wrenching statistics were at the forefront of our minds whilst we created The Art of Caring. As was the fact that few people would want to watch a play that confronted them with sad, lonely elderly men and women for an hour. So we created a comedy – everyone loves a comedy – with a message that will ring true with audience members, young and old, as they witness our protagonist, Gem, learn what it truly means to care for herself and those around her.

Little Bit of Theatre is in partnership with local charity, Impetus, whose main focus is to combat loneliness and isolation in the Brighton & Hove Area. Together, we aim to spread awareness about this massive issue that, whilst raising money for Impetus’ efforts.

A Self-Help Guide to being in love with Jeremy Corbyn

Following the success of the critically-acclaimed Burning Books, Jess Green brings A Self-Help Guide to being in love with Jeremy Corbyn to the Brighton Fring

e Festival. A rousing, lyrical and humorous look at modern politics, the show not only played to sell-out crowds at the 2018 Edinburgh Fringe but also netted Jess the title of BBC Poetry Slam Champion. When Corbyn heard the noise on social media, he phoned Jess to invite her for a cup of tea, telling her he “loved the poetry, spirit and creativity” of her work (although Michael Gove remains less of a fan).

A Self Help Guide… previewed in the Midlands before reaching the Edinburgh Fringe, where it completed a sell-out run. Jess already had a huge following after hitting a nerve with the poem Dear Mr Gove, which became an overnight ‘internet sensation’ (The Independent) in 2014. The former school librarian took the stage play based on her hard-hitting poetry about education around the UK in 2018.

When Jess joined the Labour Party at university in 2007 she doubled the number of members who met weekly in a Liverpool pub. Since then she’s stuck by the party through the downfall of Blair, the disappointment of Brown and the monolith of Miliband. Now, “after a decade of keeping her membership card firmly at the back of her wallet”, she’s fallen head over heels in love with Corbyn’s “raw socialist magnetism”. If only everyone else agreed… A Self Help Guide… sees Jess ask how the party will ever win another general election when the left is so divided.

We Apologise for the Inconvenience 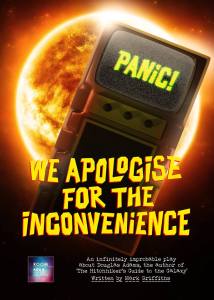 author was so late handing in the manuscript for the fourth book in the Hitchhiker’s Guide to the Galaxy series, So Long, And Thanks For All The Fish, that his editor locked him in a London hotel suite and wouldn’t let him out until he’d finished. Famously late at delivering work, Adams once quipped, “I love deadlines. I love the whooshing sound they make as they go by.”

Telling the story has been a labour of love for playwright Mark Griffiths. “I’ve been a fan of Douglas Adams since I was 10,” he said. “I sometimes joke that this play took me two days to write but 37 years to research. I loved the dramatic conceit of an author being kidnapped and forced to be funny against his will. Adams often used having baths as a displacement activity to distract himself from writing, so in the play I have his plastic duck take on human form and start chiding him to get back behind the typewriter. I wanted a suitably absurd, Pythonesque character to act as his conscience.”

We Apologise for the Inconvenience features original animations and music in the style of the 1981 BBC TV series of The Hitchhiker’s Guide to the Galaxy.

Audience members create the victim and solve the crime in a hilarious murder mystery at Brighton Fringe.

When “CSI: Crime Scene Improvisation” take to the stage, no one knows who the killer is; not even the cast! The audience provides the victim’s name, their profession and how they were killed. From there the cast improvise a comedy play set during the aftermath and investigation.

With the help of the detective, the audience gets to grill the suspects in a police line-up before identifying the murderer.

Rachel E. Thorn, of The Chandeliers theatre company, says, “The play becomes a surreal crime comedy, Every show is unique. We can’t wait to see what Brighton audiences come up with!”

The Death Show – Changing our Views about Death 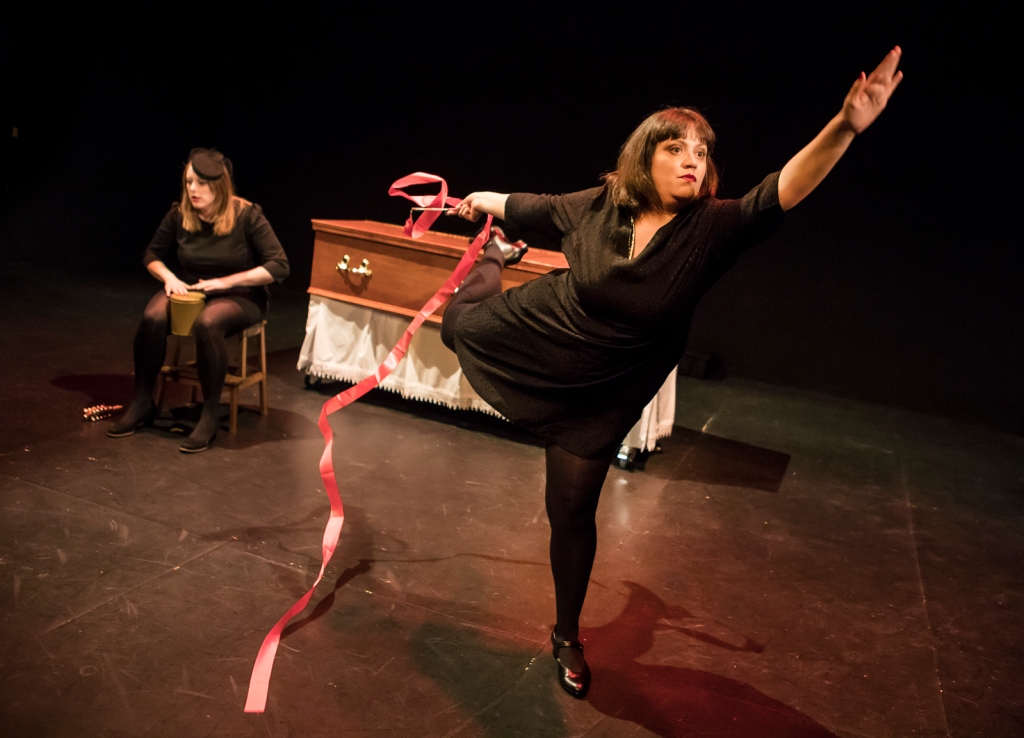 Created in response to a provocative and unashamedly honest dialogue about death, Antonia Beck and Lucy Nicholls have created The Death Show which looks to better understand society’s relationship with death and dying, and why we struggle to accept our own mortality. It is both a personal view of the subject matter, and an exploration of how we as a society can have better conversations about death and dying.

As part of the research and development for the show, Antonia and Lucy embarked on an in-depth research journey which included taking part in a celebrant training course, being artists in residence at an independent funeral directors, spending time with patients at a hospice and having numerous conversations with death and end of life care professionals as well as the general public about death and dying.

The Death Show is presented as a live, contemporary performance that is funny, surreal, reflective, honest and references a good dose of pop culture. Despite their mutual ‘thanataphobia’, Lucy and Antonia don’t believe that death should be seen as morbid, macabre, weird, disturbing, melancholic or most importantly unmentionable.