A Short Story of a Local Girl

THIS IS A photo of Joan Morrison taken in 1946 outside number three Albert Road where she lived with her mother and father in the flat at the top of the house.

Her father, Rex Morrison, was an artist and graphic designer who designed and painted posters for the billboards outside various cinemas in Brighton. Her mother was Dorothy, who was later to become my mother’s lifelong friend. 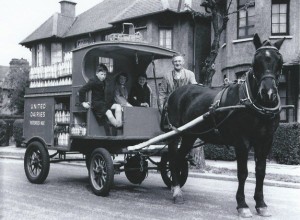 Buckingham Road and Upper Gloucester Road. Her mother used to say to her that she was initially handed someone else’s baby boy before they realised their mistake and swapped them over.

Joan told me that she remembers a lovely milkman who allowed her to sit on the footplate of his horse and cart and travel down Albert Road while he delivered fresh milk daily from large milk churns to customers’ jugs and small churns. She said, “When we got to the bottom of the road I used to jump off and run back home.”

Not long after the photo of Joan was taken, her parents broke up and Dorothy, together with Joan, moved to Rottingdean where she met my mum. I, at the time, was 3 going on 4, and Joan used to babysit for me, but by the time I was 5 my parents had also broken up, and my mother moved with me in to tow to Brighton. Following in my mother’s footsteps, Dorothy and Joan eventually moved back to Brighton as well. Joan went on to attend Clark’s College in Dyke Road.

When Joan left school she went to London to become a fashion model. Changing her name to Mandy Morrison she had a successful career. Later, she married Jeremy King who was a fashion photographer and they went on to have three wonderful children who have all done very well for themselves.

Joan is now in her late seventies but still has a good sense of style and deportment, which I am sure goes back to her modelling days.

Footnote: If  you Google ‘ship fashions 1961’ you will find film footage of ‘Mandy’ wearing swimwear in the opening shot and the photographer in the film is her husband Jeremy King.