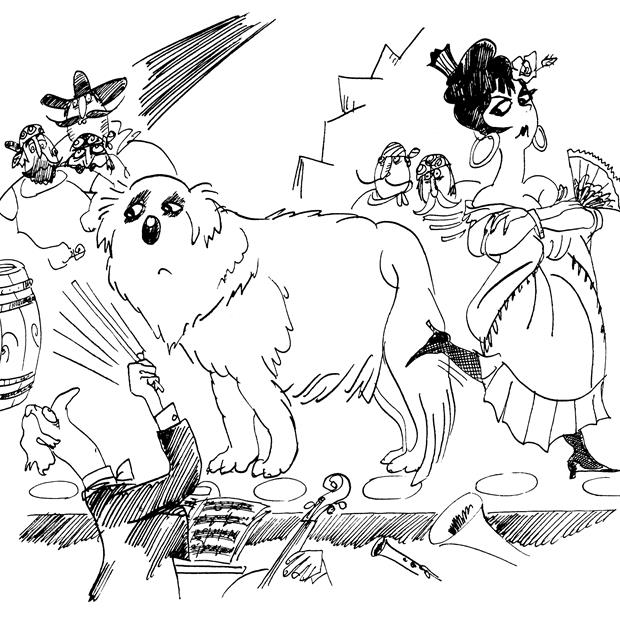 It was a Sadler’s Wells tour, and they were at Bournemouth with ‘Carmen’. In the middle of the smugglers’ scene a gigantic Pyrenean mountain dog walked onto the stage. Apparently, the theatre they were using was part of a building with offices and other rooms, and the dog, which belonged to one of the officials working there, was a very friendly beast and had the run of the building. Many of the audience who were unfamiliar with the opera thought it was part of the scene and were delighted. Others who knew better were, doubtless, even more delighted. The dog eventually roamed downstage opposite the conductor where it became hypnotised by the baton, which by then, was being used partly to conduct the music and partly to shoo the beast away. The dog was used to having people throw sticks for it to fetch, and was convinced that the baton was about to be thrown. When it wasn’t, the dog became cross and emitted a series of mournful barks. These, when added to by the cries of ‘piss off!’ which the Carmen (who had been endeavouring to kick it surreptitiously to no avail) was adding to the uproar, finally persuaded stage management to bring the curtain down. And not a moment too soon.

Aida, Rome
As a father taking his very well-brought up young daughter to the opera for the first time, Peter Ustinov was unwise enough to choose the Baths at Caracalla in Rome. So far we have allowed the Arena at Verona to have pride of place as far as animals are concerned and my own memories of Caracalla are virtually limited to the constant cries of “Gelati, gelati” (ice-cream) which obliterated the entire performance – which, incidentally, was also completely invisible from where I was sitting. Mr Ustinov must have had a better seat, because he could actually see that the whole stage became, at a certain point, completely covered with animals – camels, elephants, horses, stray cats, etc. At a climatic point, all the animals relieved themselves simultaneously. As he stared aghast at this incredible sight, he felt a light tapping on his shoulder, and his daughter’s earnest voice, “Daddy, is it is alright if I laugh?”